My mother died of liver cancer in October of 2020; needless to say, it was a deeply painful and difficult period of my life. A few months after, I watched a documentary about “the other side,” called Surviving Death, and read the book,  Signs: The Secret Language of the Universe by Laura Lynn Jackson. It was comforting to listen to stories about the spiritual world and consider that maybe my mom hadn’t died at all, that I just couldn’t see her anymore.

In her book, Signs, Jackson. a well-known Clairvoyant, claims that you can communicate with your deceased loved one. She jokes that she and her father have a better relationship now that he is dead; they communicate often and he sends her meaningful and funny messages. Jackson also relays stories of people she has worked with who have received poignant messages from their loved ones on the other side.

Besides my persistent iphone autocorrect typos, which I began to think might be a sign from my mother (mom, is that you telling me to work on my abs?), I hadn’t felt her presence strongly … well, other than a few days after she died, when my cat stood up in his bed for a long time and stared with wide eyes at something in the room that I could not see. I was watching the Netflix series, Anne with an E, which my mother and I watched together when she became too sick to leave her bed. I had the last episode on that evening, which we didn’t get to see together.

I have an open-mind and, also, a cynical side; I waffle between believing that her essence has not died and thinking that I am only seeing “signs” because they are in my mind or awareness. According to The Frequency Illusion, or Baader-Meinhof effect, when you become aware of something, you start seeing or hearing it, like a new vocabulary word you have learned. Although the incident with my cat was unusual; I have never seen him stand in his bed like that (he is more of a lounging sort of guy), and I want to believe her spirit was with us that night, my practical side tells me otherwise.

In the days after my mom’s passing, my brother and sister-in-law had a frequent visitor: a ladybug … in my niece’s room in their new home, on my baby nephew. My mom, her sister, first cousins, and close friend called themselves the ladybugs. It was their dear friend, Jeannie who coined the friendship name and when she died of breast cancer they all got ladybug tattoos. My mom’s little red and black friendship badge was on her ankle. I saw a few ladybugs around me, too, after my mom died, but nothing as synchronistic as my brother and sister-in-law’s sightings … until last November, that is (will get to that later.)

My big sign came on my birthday, three months after my mom had died. The first birthday without her, the person who brought me into this world. It was also during the height of Covid. To say I was feeling untethered and alone is an understatement. I drove upstate and went on a hike by myself that day and stared at the water, but it didn’t bring me much comfort. The following day, I went to dinner with my aunt and cousins, I opened a card from my cousin, Fabiana, and smiled. I couldn’t take my eyes off the glittery pink bicycle with the banana seat and basket. It read “Happy Birthday” in pink letters. I kept talking about the bike. “I just love this card … isn’t it so cute?”

“Yes, it really is,” everyone agreed, humoring me after the third time I said it.

When I got home that evening, I looked at the card again. My mouth opened and I pressed my hand to my chest.

In my mother’s eulogy, I opened with a childhood memory: learning to ride my first two-wheel bicycle with her by my side, for many tedious hours, as I wobbled to and fro but did not catch my balance … until finally, miraculously, I did. I remember the feeling of freedom when I was able to ride my pink bike on my own, without my mother holding the back of the banana seat, and mostly how happy she was for me.

The birthday card was from my mother. I just knew it. It was my pink bicycle on the card with the banana seat and basket, as I had described in the eulogy. Fabiana was not at the lunch after the funeral service, when I read the eulogy, so she knew nothing of my pink bicycle. No amount of cynicism could convince me otherwise; my mother, who never missed a birthday and loved giving cards and gifts, was saying happy birthday. I felt her presence so strongly when I looked at the card; it was a knowing beyond words.

I displayed the card in my bedroom (and now on my refrigerator) and every time I see it, it really and truly feels like my mom is saying hello. It looks like the type of card she would pick – sparkly and festive.

Next, I met up with my friend, Geanina, at a farmer’s market last summer. In the days prior, I was going through the last of my mom’s belongings – small, special items I had packed in a few boxes. I told Geanina I was bringing something for her: three of my mom’s handheld folding fans. They are colorful and lace-y and delicate and, like my mother, Geanina is drawn to antique decor.

At the farmer’s market, Geanina got out of her car and we hugged hello. I was excited to give her the fans. Then I saw her pants.

She looked down at them and laughed, not fully understanding my big reaction. She told me she bought them during her recent trip to Colorado from a woman who hand-makes them. They had little pink and yellow bicycles with baskets all over them. “Hi mom” I said aloud. “Hi Helen,” Geanina chimed in. “I will take good care of your fans.” 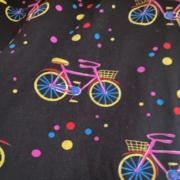 Last but not least, this past November, I was visiting my mother’s best friend, Aunt Denise (I call her). Her daughter invited me to spend Thanksgiving with them; it was, in fact, a week prior to Thanksgiving because Aunt Denise was having a major surgery the day before Thanksgiving. Aunt Denise and I were talking in the kitchen; she was reminiscing about the days of her and my mother’s youth; they grew up together in Washington Heights. When my mother died, Aunt Denise posted on Facebook: “A lifetime of friendship.” Those simple words make me cry every time I read them. It’s rare to have a friend for nearly your entire life.

As Aunt Denise and I were talking and laughing about their childhood antics, Sammantha, Aunt Denise’s daughter, walked into the kitchen and announced that a ladybug landed on her in the living room. The ladybug was parked on her shoulder and it wasn’t budging. Sammantha didn’t know about the “ladybugs,” but Aunt Denise understood the reference immediately. We laughed about having the ladybug join us for dinner, and my heart felt lighter.

My cynical side hasn’t completely disappeared and some days I think the “signs” are just the mind attaching to what it wants to see and believe and, like the fatalistic existentialist French lady in I Heart Huckabees (do you know what character I’m talking about?), I think there is no spiritual world and the signs are merely coincidences (I can hear her voice as I write this), but then I see my pink bicycle on the frig.

Want to join the discussion?
Feel free to contribute!

What the Heck, Autocorrect? But Thank You for the Spiritual Messages.

Wipe Out
Scroll to top